My introduction to the Wonderful sport of auto racing came at the old Minnesota state fair speedway in Saint Paul during summer vacation. Seeing the sights of the fair, then going to the speedway at night was an enduring experience for me as a young boy, forming my interest in the sport.

Sprint Cars, Midgets and Supermodifieds printSprints, Midgets and Supers close up This print takes me back to that summer of 1962, I hope that it gives you a feeling about your own special track. It could have been anywhere, north, south, east, or west. It might have been dirt; perhaps it was pavement. Hopefully it’s still in operation, sadly, it may be covered now by a pristine, civilized subdivision. Competing there were bright, shiny, handcrafted, open wheel creations. Perhaps they were the darting midgets, going so fast for such tiny engines. Maybe the sprint cars, with v8 engines, no roll cages yet, spending most of their time sideways on three wheels; or the aptly named supermodifieds, with things like rear engined, four-wheel drive 500 cubic inch monsters, unfettered by rules, springing from the fertile brains of men obsessed by winning. Breathtaking to watch, at times terrifyingly lethal to the brave men driving, all these cars race today in similar configuration. Truly, they are the living dinosaurs of racing.

This print captures this segment of the sport many of us grew up with, or have heard about. All the greats are here; Jan Opperman and his bitter rival, the brooding genius Kenny Weld, his brother USAC ace Greg Weld, Bob Kinser, Nolan Swift, Rich Volger, Greg Leffler, Ollie Silva, all the greats from yesterday and those still racing; the likes of Bobby Allen, Bentley Warren, the “king of the outlaws” Steve Kinser. The cars; Bogar speed shop, named “old Sh**box” by Opp, AJ Watson’s dirt car, Bill Hite’s 4 wheel drive super, and more. The tracks as well, Manistee fairgrounds, Ascot Park, New Breman, Hershey Speedway, the Midwest speed palaces of Winchester Speedway and Salem Speedway. As with our other prints, assorted phrases and symbols and who knows what else permeates throughout. A racing collectable of a gritty sport, this print is a slice of true American racing, it was the first print we did. The style is subtly different from the rest. Like racing and the country itself, it’s not perfect, but gets the job done. Enjoy. 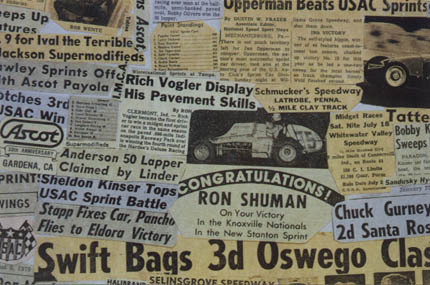